Is Drinking Water While Eating Bad?

The verdict is definitely muddled on this one, but we at least know that the amount of water consumed and the timing of the meal can influence the health effects of drinking while eating.

To question something so well-ingrained into centuries-old mealtime norms may seem foolish at first, but modern science grants free passes to no one.

As such, several of the claims made by a quiet, but steadily growing community about the pitfalls of drinking water while eating have been responded to in a series of research findings.

First, let’s lay out the battleground on which this scuffle is taking place, starting with what the objectors are claiming about drinking while eating.

Claims Against Drinking While Eating

Opponents of solid-liquid meals believe that the practice can dilute stomach acids, increase bloat, and more.

Since water usually has a neutral pH of around 7, pouring it into an acidic solution will indeed decrease acidity, raising the pH closer to neutral.

Objectors to solid-liquid meals believe that this effect holds true in the case of our stomach acids, which are instrumental in breaking down nutrients.

This brings us to objection #1: Drinking while eating dilutes stomach acids, impairing digestion.

It may seem like a simple issue, but bloating after a meal or any other time can result from several underlying conditions and nutritional choices (i.e., too much sodium or too many refined carbs).

Still, many people believe that drinking water before, during, or soon after a meal can worsen this annoying and occasionally worrisome symptom.

On the one hand, too much water may cause stomach contents to rise into the esophagus, and on the other, smaller amounts can neutralize and wash away acids in this same scenario.

This is arguably the most salient point offered by the objectors—that water at mealtime worsens GERD symptoms—but it’s not as simple as that.

What the naysayers call bloating, the pro-water-with-meals crowd refers to as a feeling of fullness.

They claim that this feeling of fullness promotes weight loss by preventing overeating.

This claim goes hand-in-hand with the previous one; when you drink water with a meal, you naturally eat slower.

Supporters of solid-liquid meals believe that slowing down gives your satiety hormones (ghrelin and leptin) more time to make you feel full.

In other words, speed is a critical component to overeating, since it takes a few minutes for these hormones to kick in and make you feel full.

Pair water with a fiber-rich meal, say liquid-solid meal supporters, and trips to the bathroom will be much easier.

Water is an essential stool softener, and if the body can’t draw enough of it into the colon at the right time, you’ll miss your window and deal with the consequences soon after.

Now that we know what each side is claiming, it’s time to turn to the science for an objective perspective.

As it turns out, the jury is stacked in support of solid-liquid meals, but not without a few lingering possibilities of doubt.

Let’s start with the big one: digestion.

The claim that drinking water dilutes stomach acids is heavily oversimplified, explains this finding from the Gastroenterology Unit of the Mayo Clinic in Rochester, MN.

Per the study, “S (solid-liquid) meals elicited a stronger early gastric secretory response (acid, pepsin, and volume) which compensated for faster initial emptying and resulted in higher gastric acidity and volume than after H (homogenized) meals.”

In other words, while water will always neutralize acids, the body is equipped with a compensatory mechanism that allows for normal digestion of solid-liquid meals.

“Gastric Emptying Rate” of Food Is Unaffected by Water

The term “gastric emptying” refers to the amount of time food spends in the stomach before it empties into the small intestine; it’s accepted as a measure of digestion efficiency.

According to a finding from the Temple University School of Medicine in Philadelphia, water consumed concurrently with food does not affect the food’s gastric emptying rate.

Conversely, food was found to significantly impact the gastric emptying rate of water, but this is understandably less troublesome than the opposite scenario.

In another finding featuring 24 obese participants, 500mL of water consumed half an hour before a meal resulted in a 13% reduction in “meal energy intake.”

It’s also important to note that this effect was observed equally across age groups, genders, and BMI levels.

Not to mention, consuming water before a meal will create a favorable environment for water-soluble vitamins like vitamin C, thiamin, and many others.

Finally, the link between speed and overeating was objectively confirmed by a study from Texas Christian University that compared total energy intake, satiety, and energy density (calories absorbed per gram of food/water) across two eating speeds.

The researchers found that normal-weight participants who slowly consumed food ingested fewer calories and felt fuller one hour after the meal began, but this didn’t hold true with obese participants.

It’s just conjecture, but this discrepancy hints at hormonal elements in play, since obese participants who ate slower apparently did not respond as well to the satiety hormones.

For or against, almost every piece of evidence related to this topic points to quantity of water consumed and timing as key factors that can sway results.

The evidence is also clouded by subjectivity in many cases, like feelings of satiety reported in weight-loss-focused studies.

Not accounting for these complications, we’re inclined to side with the majority of the research, which claims that drinking water before, during, and after meals is just fine.

As with all things, consume moderately, slow down, and enjoy yourself. 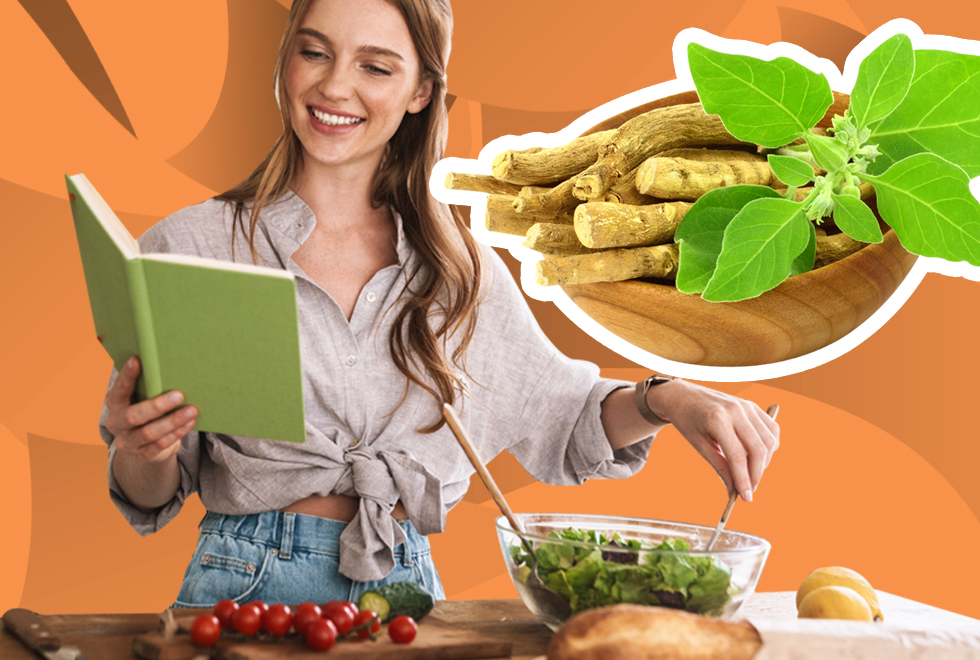 Stress-Eat the Proper Way with Ashwagandha

Ashwagandha is a small, bushy plant native to India, the Middle East, and some regions of Africa. The Most Common Nutritional Deficiencies